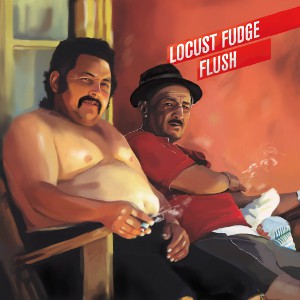 In 1991 LOCUST FUDGE was founded by Schneider (a.k.a. Dirk Dresselhaus of Schneider TM, Angel, ex-Hip Young Things etc.) and Krite (a.k.a. Christopher Uhe, ex-Speed Niggs, ex-Sharon Stoned, ex-Floor etc.). The two of them had met on different occasions when both of their rather noisy indie rock outfits HIP YOUNG THINGS and SPEED NIGGS appeared on the same bill.

Their debut album „Flush“ was released in 1993, receiving widespread media coverage all over Europe. After touring as a duo for quite a while, Schneider and Krite recorded their ground-breaking follow-up „Royal Flush“ in 1995, a milestone of lofi-glam-folk to this very day.

Comes in a special fold out cover with lot’s of liner-notes and download code.