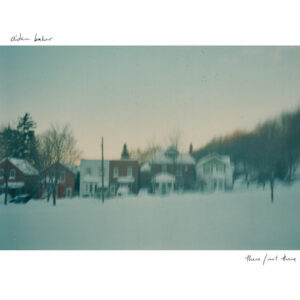 “There / Not There” combines Baker’s interest in minimalistic post-rock and textured ambient noise, the ‘songs’ themselves on this album numbering among the first Baker wrote at the beginning of his career but as yet never properly recorded. Rather than recording all parts himself, as Baker has done with previous albums, and in an effort to give the album more of a band sound and feel, he invited drum and bass contributions respectively from Fiona McKenzie (also of Halma) and Dana Schechter (also of Insect Ark, Bee And Flower, Angels of Light, Swans). Although recording of the tracks began in 2019, given the circumstances of the 2020 pandemic the album was completed via file-sharing and not in person, the tracks assembled and mixed at Baker’s Broken Spine Studios in Berlin, Germany. Simon Scott, drummer in Slowdive and also a contributor to Baker’s 2012 album “The Spectrum of Distraction” (Robotic Empire), mastered the album. Cover photos for the album, images of Toronto and small town Ontario, by Leah Buckareff.