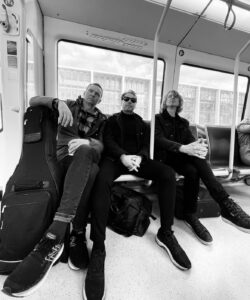 Les Dunes is a new instrumental alternative band from Haugesund, Norway. Consisting of
members from bands like The Low Frequency in Stereo, Undergrünnen, Lumen Drones, Helldorado
and Action & Tension & Space. The band consists of Per Andreas Haftorsen on guitar, Morten
Jackman on drums and Per Steinar Lie on bass.
The result reminds of the fantastic slow-core era bands of the 90ies, like Codeine who create their
own version of Explosions In The Sky songs or like Per Steinar Lie claims “it feels like the vibe of
the early days of The Low Frequency in Stereo”. The music is rooted in a thought of a long freeway
drive at night where time stops and the mind flows.