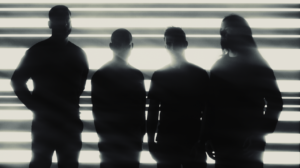 Something’s brewing. The Leipzig-based post-rock band Fargo presents a new album comprising four instrumental songs, each named after German cities, that have the sky shaking, crumbling, dreaming and resurrecting. They wander empty streets and dark houses. Founded in 2012 (and featuring a new guitarist and bassist since 2017), the four-piece uses songs both rousing and somber, intricately and cleverly arranged, to deconstruct a postmodern world that operates through seemingly anonymous power structures. Within Fargo’s convincing dramaturgies, the guitars can sound like pianos, strings or synthesizers, communicating with each other, interrupting each other, and driving each other forward, while bass and drums stoically set the tempo and rhythm. The resulting pieces have a dense clarity and inner drama, clearly harder than the band’s earlier works, and sometimes suggest a secret army marching to defend diversity against simplicity. The complex, far-reaching pieces unfold musical textures which are suspensefully interwoven, distorted and deconstructed in order to let them radiate in a furious finale. Distant relatives include the sound explosions of Russian Circles and the spheric landscapes of Sigur Rós.