Year of no light
Ausserwelt CD 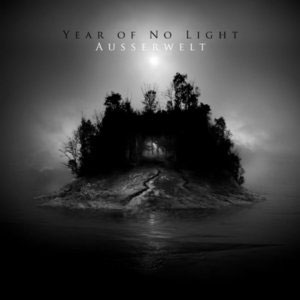 Year of no light
Ausserwelt CD

Year of no Light spent most of the last 4 years spreading its enthralling psychedelic warfare to a continually growing audience. Alongside they parted ways with their singer and recruited two other thirsty mercenaries. Shiran, of über-doom combo “Monarch!”, brings now his chthonian six strings to an already massive cathedral of noise and ambient drone tones. Mathieu, of deviant-electronics act “Aeroflot”, strengthens ritualistic tribal rhythm patterns.
Out of their cave, they secluded into an old theater to record these 4 tracks catching every possible vibration of the trembling frame of this enlivened a new mansion. All the energy collected at that very moment forms “Ausserwelt”, the sophomore album of Year of no Light. Mystical emanations flow out of these riffs colliding into each other to an in ear-splitting shriek. Cranked amps and molested drums hurl their mourning chant as a choir intoning its final psalms at the dawn of the Last Judgment. Year of no Light follows the path opened by “Nord” towards more somber psychedelics, creating its own blend of black metal, sludge, drone or any other influence marked with the seal of darkness.
Still no caps, no core neither stupid modern nihilism but instead an ambiguous electrical network of acting singularities, now ready to afford the collective metaphysical crash to come.

Here is the « Ausserwelt » CD repress, this is the second YEAR OF NO LIGHT full-lenght record and the beginning of their instrumental era with two new additional members (Shiran from MONARCH on third guitar and Mathieu as second drummer ). This edition includes the fourth original long tracks plus three bonus songs from split records released just after « Ausserwelt » (with THISQUIETARMY, MARS RED SKY and ALTAR OF PLAGUES).