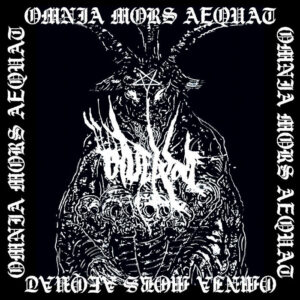 Since 2006, Vitriol and M. have been crafting their own, unique version of black metal as Nihill. Internationally recognised as one of the leading bands to combine old school influences with avant-garde experimentation and an almost infuriating, hypnotic repetition. With the passing of singer and founding member M., the cult of Nihill has come to a grinding halt.

Main guitarist and producer Vitriol has now created a new vessel for the void, called Ulveblod. The band is using some of the same session players as Nihill did, but with tracks that have all last shreds of sanity and comprehension stripped away. Ulveblod is pure, chaotic channeling of an inner anger and a feeling of senselessness, set to music. The bands’ first album ‘Omnia Mors Aequat’ will be released simultaneously with their debut show on the acclaimed Roadburn Festival, where it will be played integrally and set to a tailor made video accompagnement which will also be executed live… This unique show is surely one of those ‘not to be missed’ slots on an already stellar line-up!