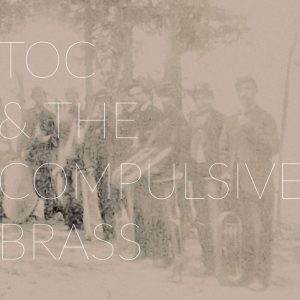 After a try of wildlife documentary (“Le Gorille” – 2009), dance (“You Can Dance If You Want” – 2012), sonic brushing (“Haircut” – 2014), and even the magic of wild acoustic spaces (‘’Qeqertarsuatsiaat’’ – 2016), Toc is now lost in the bayou and the meanders of the French Quarter, making with a cheap brass band a project which the music is probably, in the end, far from New Orleans pattern.

Toc is French jazz-core trio founded in 2008 with Jérémie Ternoy on Fender Rhodes, Ivann Cruz on guitar, and Peter Orins on drums. Playing the density and the organic, daring the trance in a joyful and catchy tension, Toc provides energetic improvised music. Noise, post-rock, psychedelic, experimental pop, jazz hardcore or kraut, difficult to classify the music of this trio as it blurs the tracks and tries to take us where we did not expect.

The trio also developed over the year several side-projects : an acoustic one, where the Rhodes and the electric guitar are replaced by piano and acoustic guitar (a CD, Qeqertarsuatsiaat, released on Circum-Disc – 2016) ; an « improvised club-music » project, Tocc Beat Club ; and Toc & The Compulsive Brass, created in 2015 with Christian Pruvost who conducts a pocket brass-band.

Toc & The Compulsive Brass, and its recording Air Bump, is a project that began with the idea of the early jazz music from New-Orleans. Fascinated by the writing and the energy of musicians like Jelly Roll Morton or Kid Ory, the members of Toc wanted to combine those sounds with their music. It’s not about re-creating old pieces, but using that material to make new music.