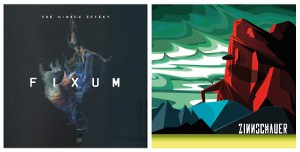 The Hirsch Effekt: Two new versions of Irrath and Datorie, an outtake from the Holon:Anamnesis session, that did not make it’s way on the album and Fixum, the first song written and recorded with the new drummer, later part of the Holon:Agnosie album.

Zinnschauer is the project of Jacob, nowadays well known as the singer of Leoniden. It’s a sort of singer/songwriter stuff but not in the classic style. Try to play a Mars Volta song on an accoustic guitar and it might sound like this.

Limited edition of 500 with inlet and download code.
Second pressing.