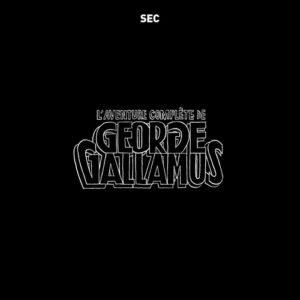 Sec is a drum and bass duo from Southern France that has been releasing music since 2011. Most of their previous records contained what you would expect from such a setup: nervous bass lines and busy drum patterns, interesting to listen although there are quite a few bands doing something similar.

And that might be why the two guys decided to go a few steps further with their newest opus L’aventure complete de George Gallamus, a “punk fable” inspired by Lightning Bolt, Shostakovich, Chromb! and Nomeansno among others. Self-released by the band you have all kinds of options to procure the album, from a free digital download to a double vinyl record that comes with two bonus CDs, the first containing the album on CD and the second being the compilation Les aventures apocryphes de George Gallamus which features thirty bands (Chromb!, Ultra Zook, Jack Dupon…) paying tribute to the album’s main character George Gallamus, giving the listener 78 additional minutes of music to listen to.

But what is it that makes L’aventure complète de George Gallamus so compelling? First of all, it’s not just an album of songs, but sounds rather like an audio play where narration and music each have their place. The album begins with the nearly fourteen minute long George Gallamus et les 1000 malices, starting with strange low noises, before the narration starts, soon to be joined by the music. There are narrated parts inbetween, so that it’s hard to consider it a regular song. The same goes for the following George Gallamus se baigne en montagne, although at four minutes rather concise, also contains a lot of weird parts at its beginning and its end. Side 2 of the vinyl contains the shorter George Gallamus et le tonnerre de schist and the longer George Gallamus et l’usine secrète d’Estagel. Side 3 comes with four shorter tracks where especially the two middle tracks, both under three minutes, show the duo from its most accessible side. Side 4 contains the La Danse des bombes / Tout est à nous, an eighteen minute long tour de force that begins with a female choir before adding more of Sec’s trademark avant prog drum and bass music.

Comparing L’aventure complète de George Gallamus to Sec’s earlier efforts, it is obvious that the musicians have worked much harder to come up with this work of art. The music is not only well played but also recorded professionally. The vocals, often performed together by the two musicians, are exceptional too. Of course this is not a regular song based album and therefore might not be to everyone’s taste. It would be nice to have also an edited version without the narration between the song parts, but that’s certainly out of the question. Collectors should grab a copy of the double vinyl album and enjoy the album as much as they should the bonus tribute CD which was a nice and unexpected surprise.

The record is beautiful packed in a fold out sleeve incl. a thick booklet and 10 (!!!) LP sized inlets with all lyrics.