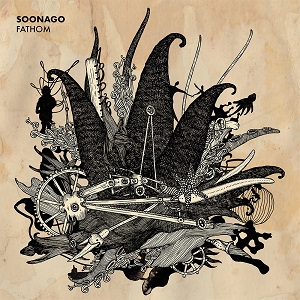 SOONAGO is a four-piece instrumental post-rock/metal band from Bielefeld, Germany.
They appeared already on benefiz-compilation Kapitän Platte released in 2021 to support the local club scene during the Corona Crisis.

Fathom offers four tracks in 40 minutes, combining the beauty of EF with the heavyness of Russian Circles.
The album was mastered by Magnus Lindberg (Cult Of Luna).
For the artwork SOONAGO could win none other than the Swedish artist Staffan Larsson, who has already proven his skills
several times on albums by the label colleagues of „EF“.

The vinyl is limited to 300 copies on clear vinyl in a gatefold sleeve plus LP-sized insert. The first 100 copies with extra print are already sold out.
CD comes in digi-sleeve.