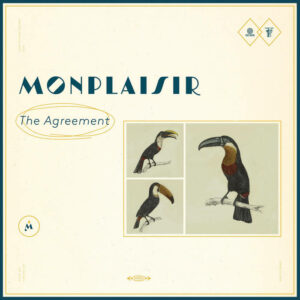 Monplaisir is a french indie-rock band.

Recorded in february 2018 at Mikrokosm (Baton Rouge, Thurston Moore Group), with Benoit Bel, then mastered by Carl Saff in Chicago, this first LP is the result of months of hard work in their practice space.
Expect grace, beauty with brillant guitar licks, driving bass lines and inventive drum patterns, as they did on their first effort, but with some magic added. Last but not least, beautiful vocals mostly recorded in one take. The sound of the LP is full of dynamics, space and sound. Something really happens on that record.
Influenced by la creme de la creme of the indie scene such as Sonic Youth, Unwound or Polvo.