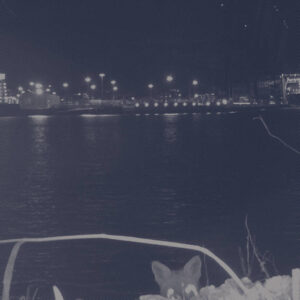 Fuchs is a band that never was. It vanished as quickly as it appeared in the picture, much like the animal that can be seen on this album and after whom it was named. In 2005, Kante singer and guitarist Peter Thiessen travelled to Weilheim to visit Markus and Micha Acher in their studio, where they were joined, among others, by Notwist-affiliated musicians like Cico Beck, Robert Klinger, Carl Oesterhelt and Stefan Schreiber. Spirits were high, but schedules were full: after a week of improvised sessions, everyone went their own way. The recordings gathered dust until Markus Acher found them again in 2021 while cleaning out his studio. After carefully re-evaluating the rough mixes, the musicians decided to finally release them. The resulting album comprises six tracks that musically draw on jazz, aesthetically lean on dub techniques and ideologically pick up on krautrock: there’s no solos to be heard on this record, just a few equally skilled and open-minded musicians listening to each other carefully, providing each other with space in which to unfold. »Fuchs« is a document of egos dissolving in a collective spirit.

For Fans of The Notwist, Tied & Tickled Trio, Alien Ensemble