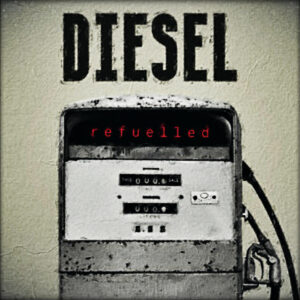 Diesel were formed in mid-1985 by the founding members Lucas Sideras on drums (ex Vangelis Papathanasiou Orchestra, Stormies, Aphrodite’s Child, Eros, Ypsilon), Giannis Drolapas on guitars (ex Vavoura Band, Music Brigades) and the vocalist Sigma Fay, originating from the field of new wave/Italo electronica, with a recording presence in Italy and France.
In 1991, they recorded a mini-LP with 5 tracks in the hard rock/power blues rock style at M.B.I. which has become a high-demand seller and collectible. This recording, along with 5 bonus tracks from the band’s rehearsals in hard rock style, is now being reissued as 300 numbered copies on vinyl, featuring a two-page insert and a photo album with members’ photos.