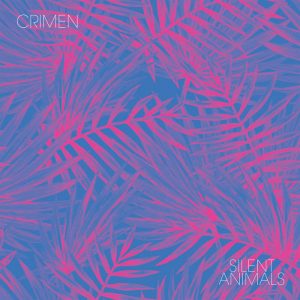 Silent Animals may be the debut album from Italian trio Crimen, but it arrives over a decade into their career. Simone Greco (bass, voice, sound engineering) and Patrizio Strippoli (guitars, voice) formed the band in the Centocelle district of Rome in 2007, before recruiting Giuseppe Trezza (drums and electronics) six years later. After a string of successful EPs and two years hibernating to record the opus, the band feel now is the time to release a full length.

A heady cocktail of krautrock, psychedelia, noise rock and post-punk.

Whilst much of Silent Animals is a crackling psychedelic experience, that the band would call ‘kraut-punk’ if you pushed them for a genre-term, the range of expressions on this album are as expansive as the band’s sound itself. ‘Left Behind’ is a wilting psychotropic power ballad, like The Brian Jonestown Massacre meeting Fleetwood Mac in a Wild West Saloon, whilst ‘From My Bed’ is a “warm teardrop” of a song and ‘Flahzz’ is a scorched piece of Ariel Pink-esque hypnagogic pop forced through Crimen’s krautrock filter.