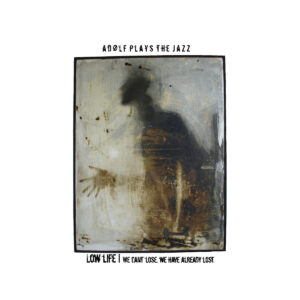 Adolf Plays The Jazz make their comeback with 10 short urban fiction stories, trying to reflect the influence of the decennial socio-economic crisis, along with the recent pandemic, on people’s psyche. Having as a vehicle the noise produced by their amplifiers and their voices, they try to accompany the failures, confusion and anger of those people with sound. This sound, retains their Swans and Sonic Youth references, as integrated in their previous album Tinder (2015), while, even though now vocals seem to be in the center of these compositions, they keep their post-rock structure of repetitive patterns leading to guitar crescendos and noisy, multilayer outbreaks. The extra CD has 2 more tracks, resulting to a 63 minutes total duration, including the introductory “The Things We Kill” as well as the almost 9 minutes-long nightmarish “Henry Spencer”, which is inspired, as highlighted by its title, by the Kafkaesque industrial world of David Lynch’s Eraserhead….

Limited edition of 300 copies on 180gr clear vinyl. Includes the CD of the album with 2 bonus tracks.